A downloadable game for Windows and macOS

Heavily inspired by themes and tropes in 90s Magical Girl Anime, Sylvie is a submission for the Magical Girl Game Jam https://itch.io/jam/magical-girl-game-jam

You're part of an evil-hunting squad, but recently your partner has gone missing while out on a contract.  This is a very short platformer where you hack and slash your way through a cult hideout and face a challenging rival.

The optional themes we chose to run with were I'm Not Afraid of Anything Anymore and My Very Best Friend.

Controls: Arrow keys to move, <Space> to jump, <S> to deliver sweet justice unto the faces of any who would stand in your way.

Programming and art by @toffey_

Direction, writing and music by @_mired

LINUX PEEPS: You'll need to have Love2D (version >= 11.0) installed on your computer. Download the Windows version, unzip Sylvie_Windows_BUGFIXED.zip and run "love Sylvie.exe". It should run fine~!

This is so cool! I haven't even finished the game yet and I'm having a blast. Just crashing a party and smacking the living daylights out of people with a bright orange strat. Hell's bells is it satisfying.

The biggest complaint I have is the controls. It's not that they're not responsive, it's that the default binding is dreadful. I thought we all agreed on Z being jump and X being attack?

Putting jump on Space and S on attack prevents me from playing the game without straining my wrist. Either I keep my arms straight and put unecessary pressure on my middle finger, or awkwardly hug the air with my arms and lean forward just to put my hands in a more comfortable position. As I type this I realise that I could use my thumb for jump and my index finger to attack, but I shouldn't have to interpret them like this. It gives me whiplash.

The game looks great though. it's certainly got that old-school anime charm with colourful, chunky pixel art with tonnes of hitstop and particle effects to keep things feeling juicy.

The combat feels excellent, but only when you're doing well. It's a shot in the dark as to whether you'll actually hit anything because with so many enemies on screen and so few animation frames to go around it's difficult to tell when to pull back, and hitting things feels so good you don't want to stop. A few defensive options like a parry, dash or block wouldn't go amiss. Right now, it's be quick or be dead.

It's also a shame that Sylvie never plays that guitar of hers. Sure, it's probably completely broken and there's nowhere for the sound to come out of, but some hot licks at the beginning and end of a stage wouldn't go amiss (or just a button I could press to really bring the noise to stun enemies or buff myself).

Overall, I think this game is epic. Shine on you crazy diamond.

Reply
jordanthompson2 years ago(+1)
Really thought this experience from start to finish was super rad. I was (and continue to be) confused as to what was giving me hp back -- I thought maybe it was resetting my life if I lost all hearts, but that doesn't appear to be the case when you fight the last boss.

Pixel art, soundtrack and controls all felt phenomenal. Really enjoyed this experience the whole way through. You should be super proud!

music & art were so cohesive that i had to keep reminding myself this was a short game so as to not get too immersed, haha.

i liked the wall-slide mechanic, and i hope this could be developed into a wall jump? some of the background art was also more convincingly interactive than it was art--i.e. the chains hanging from the ceiling. i thought these were meant to be grabbed haha. i guess i was itching for more player capabilities, but this is a HECK of a lot to complete with such a polished result in just two weeks!

This is so well done!!! the pixel work is so impressive ^^

We don't have a Linux build becasue currently there's no good way to distribute a Love2D project cleanly for Linux specifically. HOWEVER, you can still run it!

If you have Love2D installed on your system, you can download the Windows build, unzip the folder, and run "love Sylvie.exe" and it runs fine, natively! Tested on Debian!  Let me know if there's any problems!

It was a nice game to pick up and play for 15 minutes or so. I'm a fan of simple hack and slashes like this. The music was good as were the sprites.
The bottle smash sound was a bit old by the end but not horrible at all. I love the idea of the strength boost when you're on low health.

A few complaints, though. Comboing anything without a wall around was impossible, since swinging the guitar basically ruined all momentum you have. The jumps felt extremely high, but not bad at all.
It might've also just been me but I found the control scheme a bit odd. Using the arrow keys with the spacebar but not the up key felt a bit odd.

Overall, given the time frame it was made in, it's a pretty good game. With a bit of QoL and mechanic adjustment it'd be great

Thank you for the game. I hope it's good

Hi! Sorry, I'm having some trouble opening the game.

I've downloaded it to my computer, but I get an error related to Love2D.

Is there an alternate way to run it? I'm on Windows.

OH NO, that's my fault sorry, made a typo in a config file while doing some quick debugging before launch. I'll upload a fix soon, thanks for the catch!

As a quick fix, it should work if you don't have any controllers plugged in

Okay, I've added a bugfixed version! Please let me know if it works! Thanks again~!

Short, but sweet! Great job on this one.

Thank you very much! ;u; We're glad you liked it 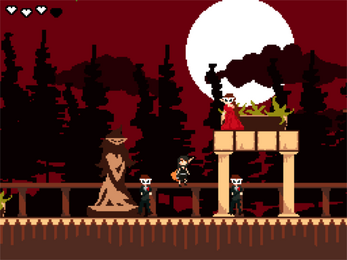 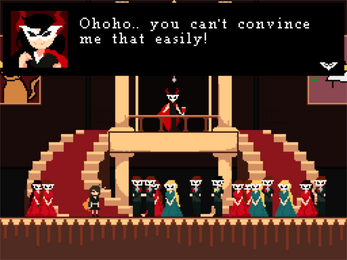 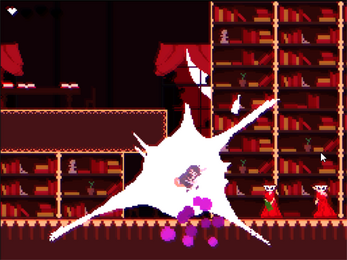 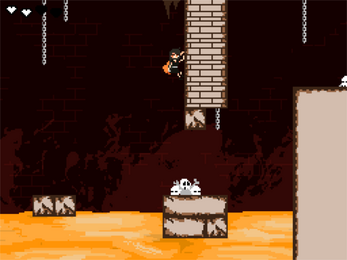 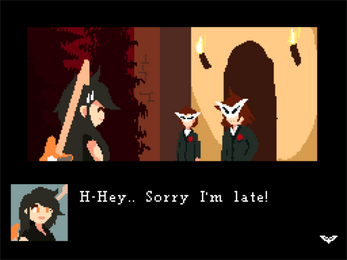