A downloadable videoae game for Windows and Linux

Lovingly made for the Magical Girl Jam 2018  (https://itch.io/jam/magical-girl-jam) hosted by Jimi (https://jimimasuraki.itch.io/), having less than 3 days development time.

Lore: you're a small forest deity with a duty to spread and protect the forest life! it's only natural that one day u get an opportunity to plant a seed, you'd overcome and destroy anything in ur path to plant it. it's a videogame boyys

BUT THIS TIME IT ALSO HAS:

All of the assets were made by me and it's my first time trying to make good videogame music, if you have any feedback on it, or anything else, please let me know in the comments I read them all!

And a huge thank you to all the people who have supported me when making these little things, you're awesome!

Thank you for playing!

A very good game and very original graphics. It would be nicer with some more final bosses but I like it.

hi! your game is super fun, i've been enjoying speedrunning it. thanks ^^ 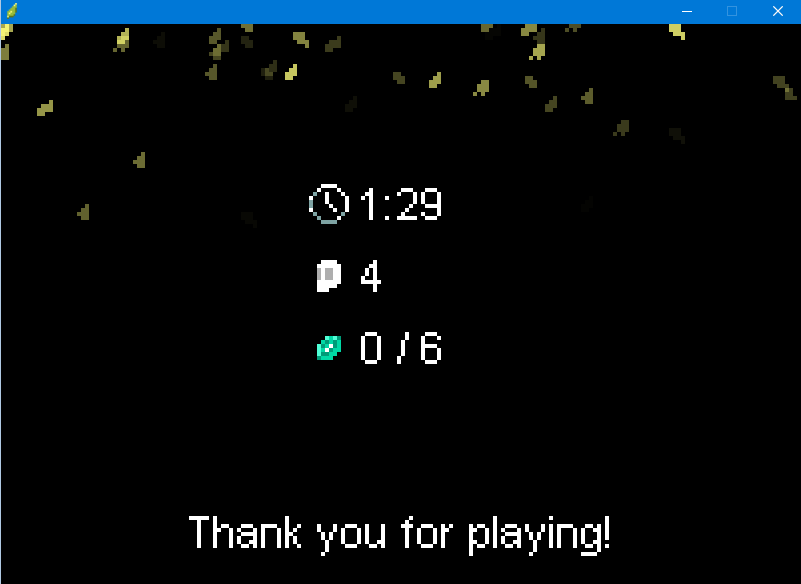 At the beginning of the game it says z is the jump button, which didn't work. I assumed it was a bug or something and proceeded to 100% the game without the jump button, and only after the boss did I realize that I could have jumped that entire time. Fun game, though, had a lot of fun with it. I'll play it again with the jump button this time

That's absolutely hilarious & I'm so sorry I NEED to fix this freaking game!! Thanks for playing anyway, how did you even do that <3

I really enjoyed this game! It's AMAZING. The graphics the physics as a retro gamer, are perfectly balanced, the score system is very fair, get 6 gems and that's it. Great job!!

thank you. that was a very difficult game but i got there in the end :3

Just a little something I found out by accident and wanted to show.

Apparently, if you kill the boss immediately after your death... This happens.

(Note: Rapid fire being possible is only due my computer's performance slowing down by like 30% when I try to record on it, the game runs at normal speed otherwise)

(Also, love the game, it's wonderfully done for being a game jam entry, just thought this could be fixed, even if it was hilarious to me for some reason the first time I encountered it)

Yooo what the heck, that's hilarious. I hope it doesn't happen too often, my hard drive has failed recently and I've lost the source code to this game, so I can't fix this! Sorry! ;u;

But thanks for letting me know anyway! I'm really glad you like it!

Thank you for this beautiful game! :) I really liked teleport mechanic ^^ 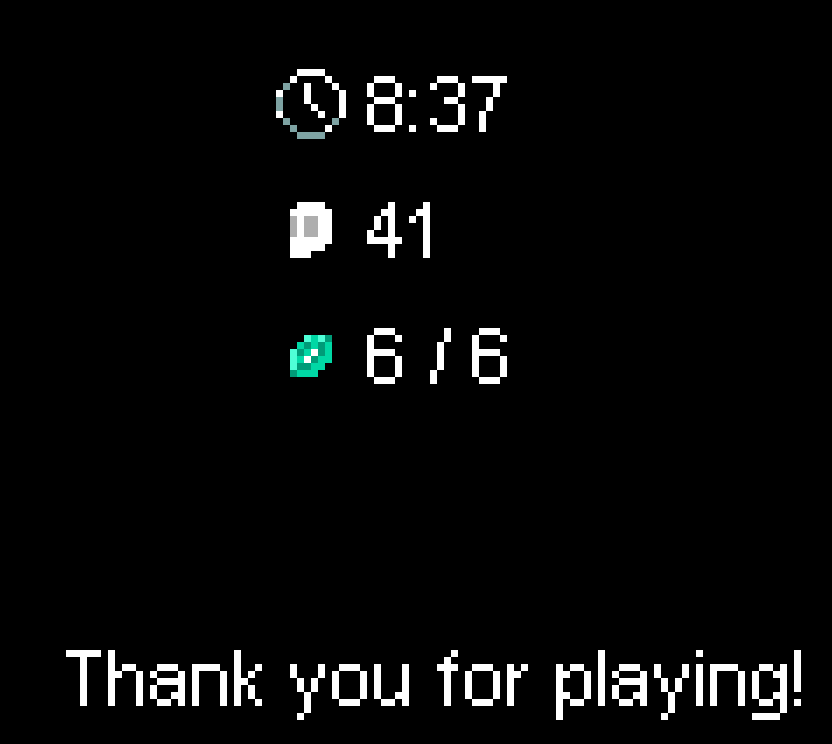 Very nice game! It's very polished for a gamejam entry. The graphics are nice, the controls are smooth and the difficulty is perfect!

Hi I don't know what is going on but the movement controls are all messed up for me, I am only able to move in one direction with (L). Is there something I can do to correct that?

hey sesshoth! if you're on windows, in the folder you download there should be a "controls.ini" file, you can change keybindings in there!

please let me know if it works properly, i only tested it a little, hope that helps~!

Okay so I downloaded this game to check this and I couldn't move in any direction at all, I've made a quick fix and hopefully everything's good to go. I cant believe I missed a bug like that haha

This was such a cool game! Thank you so much for making it.

I absolutely love the teleportation mechanic, and how it gives you a dodge move without spesifically being a dodge? The boss fight espesially it was extremely fun to use!

Reply
Far Away Times4 years ago(+1)

I totally loved this, thanks so much for making it! I beat the extra boss 😎

OH hey I do! @toffey_ I removed it from my page because i was changing stuff around and forgot to put it back

This was a great entry in the Magical Girl Jam. I'm glad to see you're still doing great work!

"It would have been nice if getting all the crystals unlocked some secret ending or something different" - AAAAAA it unlocks a secret boss if you go back to the statue! And the controls are configurable in controls.ini. Good little vid though, sorry that my game frustrated you... glad you played it!

Oh dear. Well I went back, the added controller support was the perfect fix for the controls.

I didn't notice the eyes of the statue glow for a second when you pick up the crystal there.
The additional boss was nice extra content, although their screen clearing move was hard to discern. It took me a while to figure out why I was even dying.

A little frustration is perfectly acceptable. It can even add to satisfaction of overcoming the challenge,  so long as the player is able to tell why they failed, learn from their mistakes, and feel their progression with each attempt.

I'm happy to have played it, and again I can say, I'm super excited to see what you do next.  I love your content.

Especially loved the 'hidden' boss battle because i'm a sucker for semi-difficult boss fights. only wish that she had a phase 2.

The game is very smooth, though there were some FPS problems at times. The teleportation  mechanic is very well done. The regular minions could use a tad more effort but the bosses more than make up for it.

14 Mins well spent! *P.S to those who have submitted letsplay videos down in the comments, you all missed the 'Hidden' boss*

P.P.S - The sound track was amazing! Doesn't feel like a first attempt at all!

I'M ALWAYS ON THE EDGE OF MY SEAT WAITING FOR A LETS PLAYER TO FIGURE OUT WHAT THE GEMS ARE FOR! LOL

And heh, thanks a ton! I only just managed to get that second boss done in time for the end of the jam. I may add neat little extras, but considering so few people even find the second boss (even after I added a huge hint) idk if adding new stuff to the secret boss would evem be worth it. Not for this small jam game anyway, but I may expand on this idea in future.

And thanks for praising the soundtrack, it's my first real time but I'm very happy with it! o7

Magic Wolfgirl is a short, but fun game with well polished controls and a nice, pixelated art style. The teleportation mechanic, while I am not very good with it, works really well. The puzzles are an enjoyable challenge, though you have to be really quick at times, and the use of a bow and arrows for both teleporting and attacking kept things flowing nicely.

Good job on this, dev. (Also, hi again. I played White some time ago.)
Reply
Toffee4 years ago (1 edit)

I love how much you insist that you're "not good at teleporting" YET YOU ACED THE ENTIRE THING, getting most of the gems on the first try, and dodging tons of traps I set! And killing the boss in like, 10 seconds because you have SUPER RAPID FIRE?!? You make it look easy lol. (I totally don't believe that was your first time playing heh)

This is awesome, thanks for playing again Mr Skysen! Really enjoyed this! (I can never get enough of your voice)

Let's call it beginner's luck then, because I normally have loads of trouble coordinating multi-directional teleportation. About the gems, I just like collecting things in games and thought it might get a reward.(I just noticed you telling others it unlocks something, so I'll look into that.) As for the boss, that's just fun for me to do. Years of practice with button mashing, heheh.

Glad you enjoyed both it and my voice. (Never been confident in my speaking, so recent compliments have felt...different.) Since I noticed you have a couple of other games, I may give them a play sometime as well.

Edit: Died a few extra times(24), but I just cleared it in 8:30 after unlocking the statue. It took a couple of deaths to figure out what the flash attack was. Well done on the hidden thing.

Fantastic game, it has a real charm and dificulty to it, like that of pico8 Celeste.

I even managed to beat the secret boss :)

Celeste (the p8 version) was a big inspiration for this! :D

That's awesome, and thank you!

High level of polish, really impressive stuff.  Takes <10 minutes to play through but thoroughly enjoying and I recommend anyone who has 10 minutes play through this right now!

Reply
Raithias4 years ago
This starts out fairly simple. You shoot your arrows and, monsters but, than it gets more difficult as, you have to shoot your arrow and, then  teleport to it hopefully not dying in the process!
Reply
CoalFire4 years ago(+1)

I went into this expecting a cutsie pixel art platformer but was pleasantly surprised when it was actually pretty difficult. The mechanics are simple but solid, the puzzles are clear and challenging and its all so damn precise and fast. On top of all that the final challenge perfectly makes use of all the established mechanics in  way that really does feel like a final test of everything you've learned. Fantastic work! And for a game jam no less!

thank you for this coalfire! this video was awesome and you are such an entertaining and enjoyable personality. really like your analysis of the game at the end too, it's precisely the kind of gameplay i was going for. glad you enjoyed it~!

PS For anyone watching, please consider subscribing for a copious amounts of indie games.
Reply
GHOSTMEAT4 years ago(+1)

Awesome game! The difficulty was finely tuned and the art is very good. I thoroughly enjoyed my nine minutes with it and I can't wait to try speedrunning! 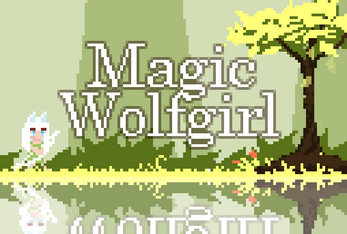 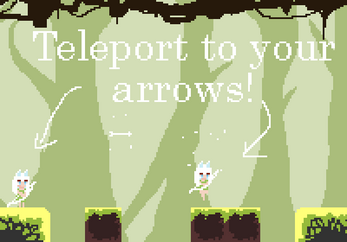 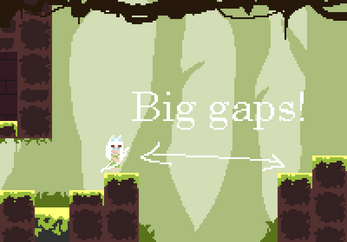 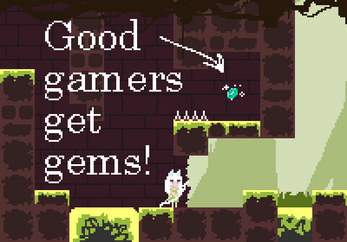 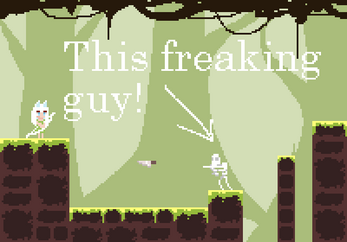